Living in the suburbs, we try to get out and support some of the local restaurants in the area, yet hope for something new and exciting. We happen to come across The Mexican Gourmet one weekend. I’m not sure how long this has opened, but it seemed relatively new. They have their original location in Maple Ridge, but this new location is located in the PoCo Place Mall next to the Michael’s on Lougheed Highway near Coquitlam Centre. My hubby and I love Mexican food and always seem to prefer heading south of the board to Bellingham for our favourite, La Gloria. We decided to give The Mexican Gourmet a try for dinner last week.

The restaurant has limited seating, around 20 people. We picked our seat near the window and were presented with menus quickly. Service is prompt. There’s one person in the kitchen and one server the weeknight we went.

I decided to order the Baja Fish Taco, battered seasonal fish, with crispy lettuce, signature pickled onions and fresh salsa on wheat flour tortillas and a regular taco with Chicken Pibil (flavourful pulled chicken braised in their home-made achiote marinade). To be honest, I’m not a huge fan of battered fried fish in a taco. It’s like having fish and chips but wrapped in a tortilla. I prefer the grilled fish taco. This fish was flavorful, but it didn’t wow me. However I really enjoyed the chicken pibil taco. It was really flavorful with the pickled onions and salsa. 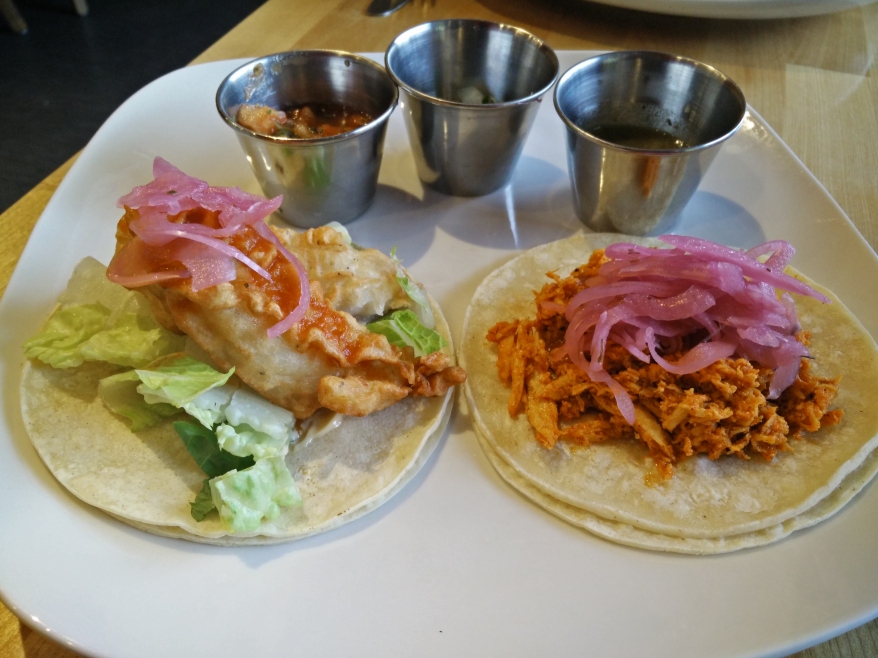 My husband decided to try the Artisan Burrito Wrap stuffed with Mexican Pulled Pork “Cochinita Pibil”. The Burrito came with salsa, beans, rice, pickled onions and melted cheese wrapped in a wheat tortilla with a side salad, salsa and Mexican sour cream. My husband enjoyed the burrito wrap, it was nice and healthy, and the right portion. He did comment that it wasn’t Chipotle’s in terms of size and pricing, however at $7.98 and within the Tri-Cities area, this was a great deal with great taste. I took a few bites and enjoyed the texture the rice, beans and pulled pork had mixed into the burrito. Next time I come here, I’ll probably order this dish. 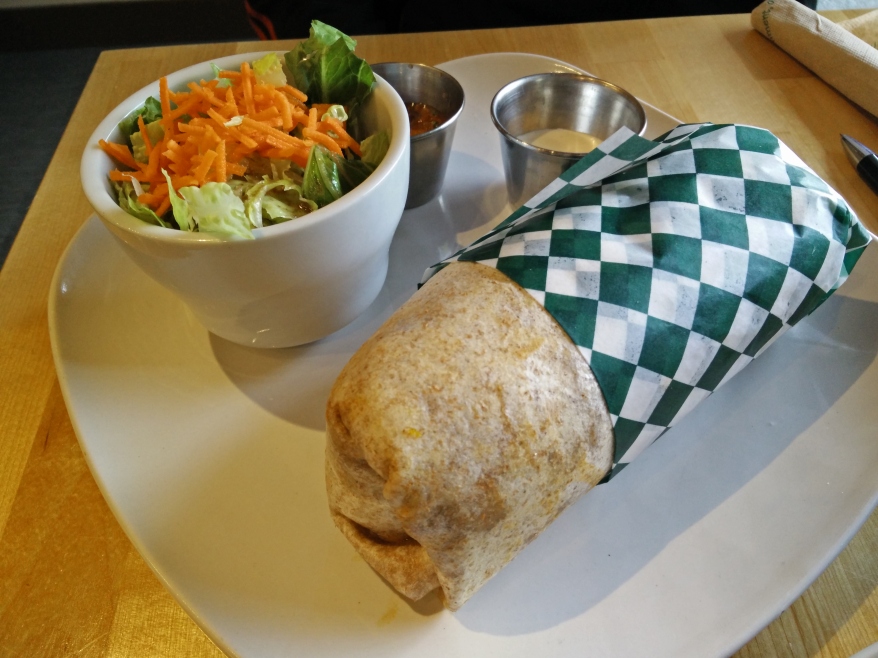 We finished our dinner with fresh made to order churros. I was hopeful perhaps that the churros would be deliciously made with a filling inside. Upon taking my first bite into the hot fried dessert, I enjoyed the cream that oozed out. However after a few bites, it became quite dense and not as appetizing as churros I’ve had in the states at other Mexican restaurants. I’d give it a 7 out of 10 on a scale of yummy churros.

Overall, The Mexican Gourmet’s a great quick fix for Mexican food. However, I hope they can start offering a grilled fish alternative to the baja fish tacos. BTW for those who are vegan or gluten free, they have both on their menus and indicate that on their menu as well. You can follow The Mexican Gourmet on Facebook or on Twitter @TheMexGourmet.