Annie the Musical – Burnaby – February 1-16 Align Entertainment presents the family favourite Annie: The Musical.  Annie is based on the popular comic strip by Harold Gray, and it has become a worldwide […]

The Vancouver Foodster Best Sangria Challenge is running from September 13-October 7, 2018 at restaurants all over Vancouver!  You taste & vote! Restaurants and bars from all over the city are invited to […]

Vancouver Foodster’s latest Tasting Plates took foodies on a tour of my neighbourhood – Coquitlam! I was excited to be exploring my own neighbourhood, trying 5 new establishments that up […] 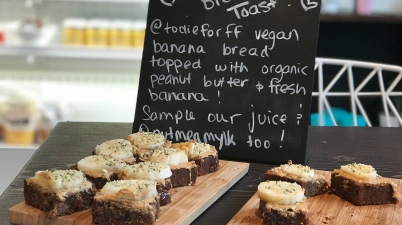 For this edition of #TastingPlatesYVR, Richard Wolak, aka Vanfoodster, took us on a trek across the Lion’s Gate bridge to Lower Lonsdale. These events are a great way to explore […]

How to spend a rainy night in Vancouver? Join Vancouver Foodster’s Tasting Plates Vancouver on a food tour, that’s how! Last night my friend and I, both Coquitlam suburbanites, grabbed […]

You know that summer is here when Richard Wolak announces its Vancouver Taco Challenge. This is when Restaurants from all over the city are invited to enter their one-of-a-kind, tasty creations for […]

Because who can say no to pizza? Richard/Vancouver Foodster recently hosted his second annual Pizza Palooza – an tasting extravaganza featuring several of Vancouver’s best pizzerias. Registration brought us to Dogwood […]