I have a pretty well-stocked bar at home, and I have to admit that rye whisky is not included. I have scotch, brandy and cognac, but no rye. After the Canadian Club tasting event I attended last night at Wildebeest in Vancouver, that’s definitely going to change.

Descending downstairs into the “Underbelly” room, the first thing I noticed is the long, rough-hewn, wooden banquet table that is befitting a place called Wildebeest. It was elegantly lit with simple votive candles and lined with glasses of amber liquid that refracted the candlelight around the room giving it a warm, golden glow. 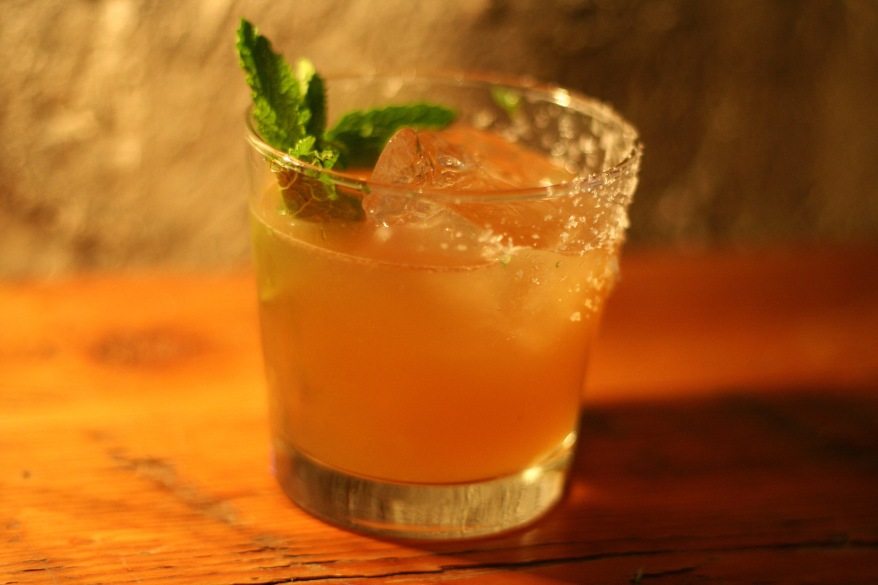 I was greeted with the first drink of the evening, a White Dog concocted with Canadian Club Chairman’s Select 100% Rye whisky, grapefruit and lemon juice, honey syrup and garnished with a sprig of mint. It immediately woke up my taste buds with its sweet/sour flavours that were refreshing and smooth. Raw Reed Island oysters and cured meats were served as Hors d’oeuvres, their salty and briny flavors pairing well with the cocktail.

Canadian Club whisky has a long, interesting and checkered past, as we learned from Tish Harcus, the Brand Ambassador for Canadian Club. It was first created by Hiram Walker in 1858 which became a staple at fine gentlemen’s clubs throughout Canada and eventually in the United States, then known as “Club Whisky.” When prohibition took hold, famous mobsters like Al Capone and Bugsy Malone smuggled the smooth, barrel-aged whisky over the Canadian border into the United States where it was in huge demand. But denying people their spirits and elixirs was not terribly popular, especially as the harsh reality of the Great Depression made life difficult for many. Eventually prohibition in America ended in 1933, and the Club Whisky flowed legally over the Canadian border once again like amber waves of grain.

Today Canadian Club is one of the top makers of rye whisky and they have several different blends and brands. I tasted four of them this evening.

It all began with the Original 1858, their flagship and best-selling whisky. Tish asked us to swirl the whisky around in the glass and then watch as “tears” formed when the whisky coated and slowly ran down the insides of the glass. I guess you can say we were all crying into our whisky. But they were tears of joy, with flavours of caramel and a hint of apple. 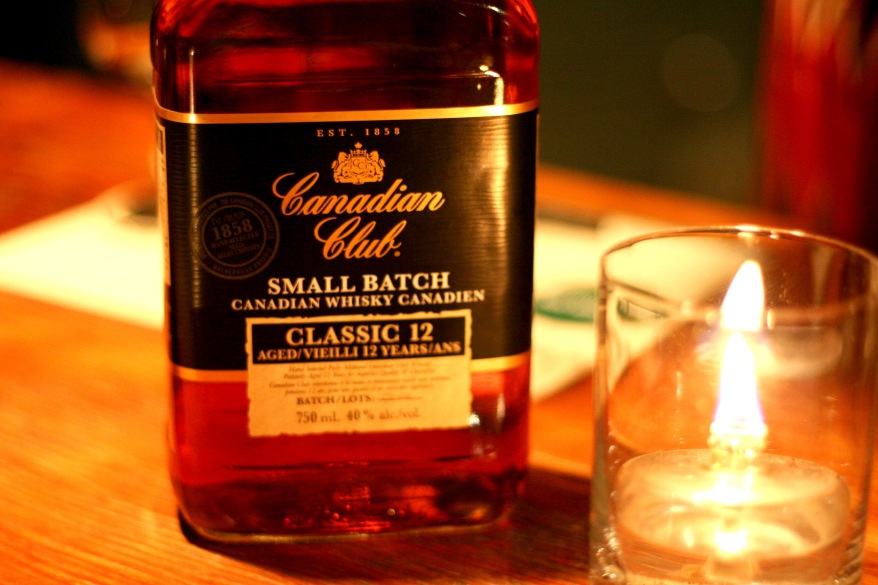 Up next was the Classic 12 Year Old, which is aged for — you guessed it — 12 years in seasoned oak barrels that are lightly charred to bring out the oaky flavour. This was a more refined and “creamy” whisky dominant with butterscotch and toffee that you could easily drink straight-up on the rocks like scotch.

The Chairman’s Select 100% Rye whisky is currently only available in Canada and Japan, as one of my Twitter followers from the U.S. lamented when I posted a photo of the bottle. Have no fear, it’s coming to America soon! This one had a distinct aroma of bananas with vanilla and oak on the tongue. I’d say this is the single-malt of rye whisky because it is made with single-grain rye, no corn. 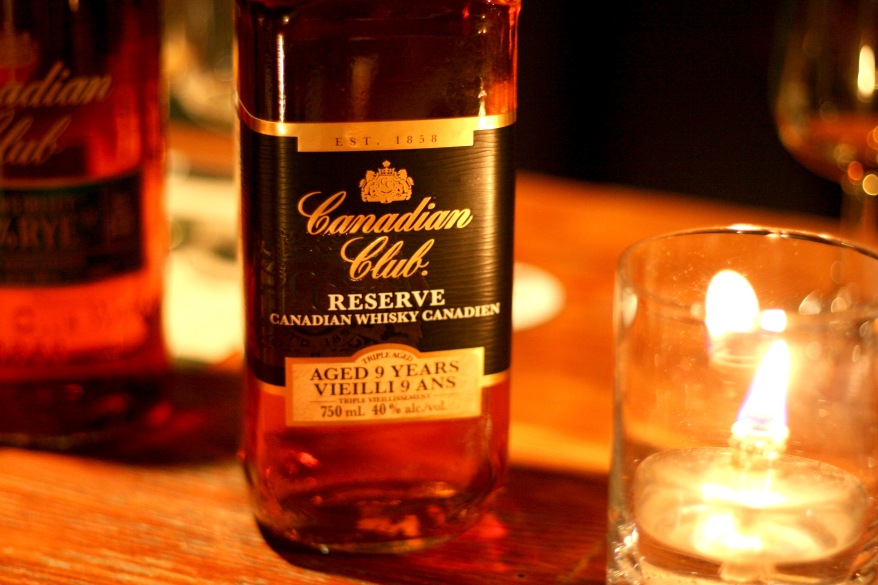 The final tasting was the Reserve whisky, the most refined and aged in white oak barrels for 9 years with a higher content of rye. It has a very light aroma, color and flavor, also with notes of vanilla, toffee and toasted oak.

Speaking of which, by now the room was getting louder and we were all feeling quite toasty ourselves. And hungry! Now it was time for dinner which was prepared by Wildebeest’s Executive Chef, Pekka Tavela.

The first course was a Spring Beet Salad served with cucumber, compressed apple, ricotta salata, miner’s lettuce and sprinkled with a bit of “beet dust.” Yes, beet dust. If only the dust on my bookshelves tasted that good! The combination of sweet golden and ruby-red beets was delicious.

The main course was a big, honking plate of BEEF. Not beef. BEEF! We’re talking grilled Angus ribeye cooked perfectly to medium-rare with smoked salt and herbed potatoes piled high on a platter for four of us to share. A rustic, brash dish that made you realize why this place is called Wildebeest. AND THE SAUCE! Oh my goodness, the garlicky jus made with Canadian Club Chairman’s Select 100% Rye whisky was absolutely sensational.

This course was paired with yet another cocktail called a Bensonhurst, made with the same whisky in the sauce, dry vermouth, Cynar (an Italian bitter liqueur) and a dark red maraschino cherry speared with a wooden stick, served in my favorite type of cocktail glass, a coupe. Even though I was a tad tipsy at this point, I finished the whole damn drink, it was too good not to!

While the Bensonhurst cocktail could have easily been dessert, dessert was still to come. But not just yet! Now we all, in groups of four, marched over to the bar where mixmaster Matt Jones and another bartender were letting each of us make one of two cocktails: a “Dry Rye Manhattan” or a “Walkerville Affair” which was based on a Whisky Sour. I chose the Manhattan because, well, I lived there for 22 years so it seemed perfect for me. Matt walked me expertly through measuring out the whisky and vermouth, zesting a lemon and extracting the oils, then stirring (not shaking) the drink like an expert bartender. It was delicious, but, really, I was at my limit at this point so I just couldn’t finish the whole thing.

I did my best to walk back to the table in a straight line without embarrassing myself where a small bowl with a simple but perfect quenelle of ice cream was slid in front of me by one of the deft wait staff at Wildebeest. It was flavored with, yes, MOAR WHISKEEE. This time it was the Chairman’s Select Maple rye whisky which gave the frozen custardy cream an intense and lovely sweet maple flavour.

And if that wasn’t enough (it was), as I finished my dessert, Tish handed me a shot glass half full of the maple whisky to try straight up, which of course I did. It makes an excellent sweet after-dinner digestif.

With that, I grabbed my camera and coat while kissing, hugging and giggling with some of my fellow tasters, then ascended from the Underbelly of Wildebeest, sated and lubricated, to the street where I hailed a taxi to take me home.

My son and I have made it our weekly ritual to stop by @dominionsurrey every Friday. We’ve gotten to know the staff pretty well, and they’re the reason why we continue to come back time and time again. (The food is really delicious too!).
Blueberries for dinner? Yes please! @bcblueberries is celebrating frozen blueberry season by teaming up with @localfoodsupplyco and creating a Blueberries meal kit.
Ramen appreciation post. The ramen combo at @umami_ramen_1 in @dtsurrey is only $12 and it’s a lot of food! Delicious, thick broth makes this dish a must try. #surreyopenwithcare