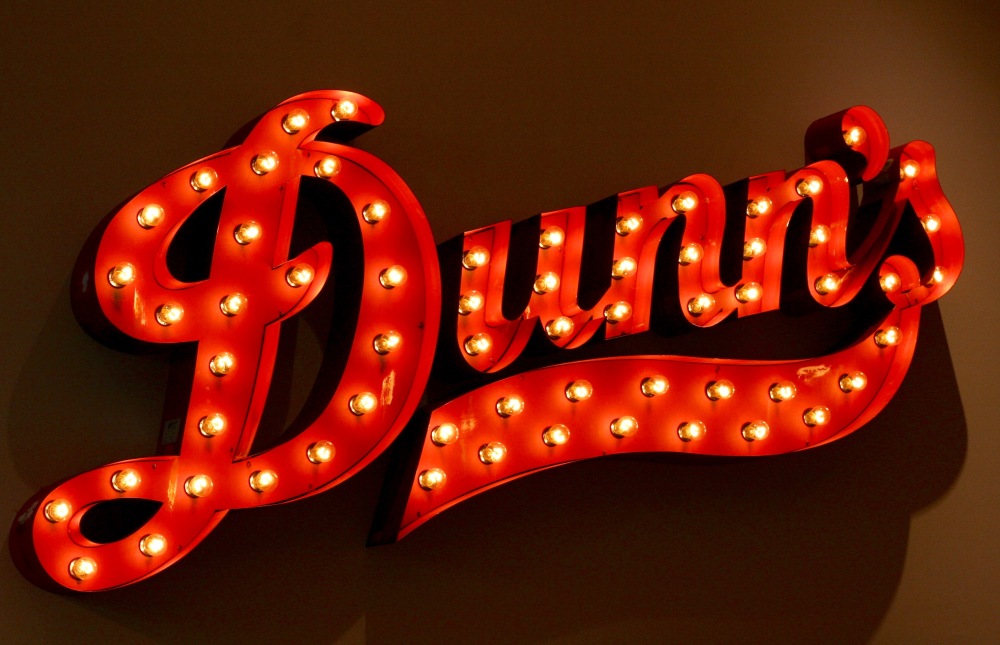 Ask anyone in Canada that loves food what Montreal is known for and they’ll most likely say poutine and smoked meat. At the newly-relaunched Dunn’s Famous in downtown Vancouver you can get both of these authentic tastes from Montreal every day without having to buy a plane ticket, pack a suitcase, take a taxi to the airport, get on the plane and order two martinis. Now all I have to do is have two martinis and take a short taxi ride to Dunn’s!

I’ve had my share of those famous deli sandwiches in New York at landmark holes-in-the-wall like Katz’s Deli in the Bowery where pastrami and corned beef are piled high on rye with spicy mustard. Mmmm! I can still remember how they taste. The smoked meat sandwiches at Dunn’s bring back those memories to my tastebuds with their hand-sliced, beefy, smoked brisket sandwiches. 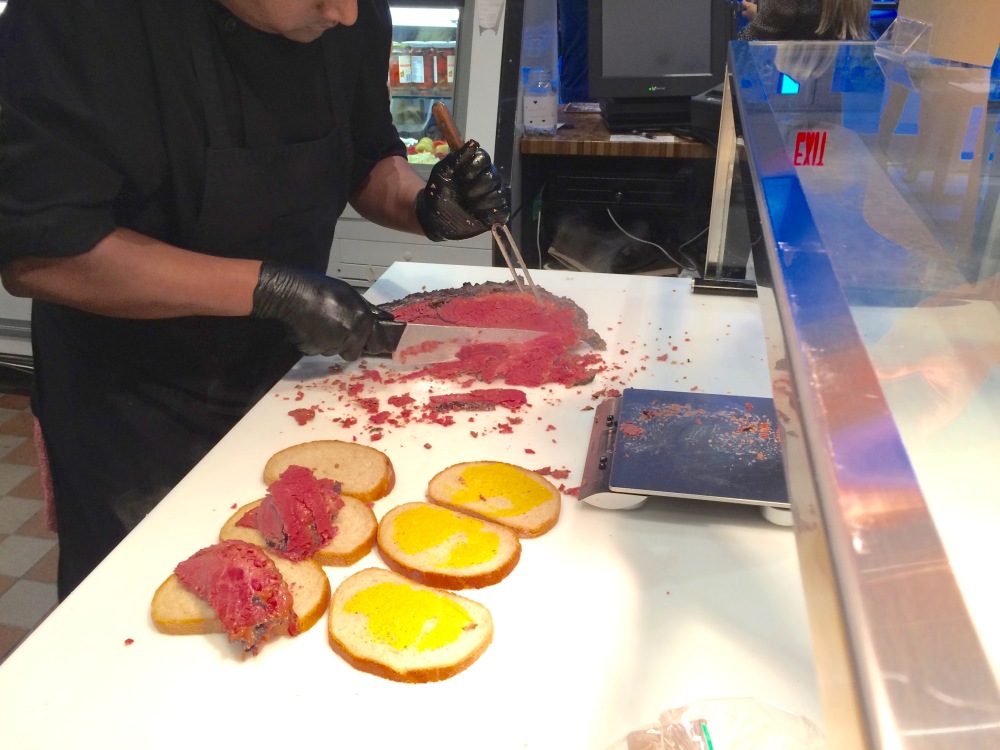 Dunn’s Famous Vancouver, the only Dunn’s outside of Montreal and owned by Cindy Heaven who hails from Hong Kong, says they are the only place in Vancouver that hand-slices their smoked meat to order for each sandwich. That ensures freshness and juiciness. The Master Slicers, as I call them, take years to perfect their skill, and apparently this skill is passed down through generations. Wow! And here I thought my knife skills were pretty stellar. I’m just a single-generation slicer-and-dicer. 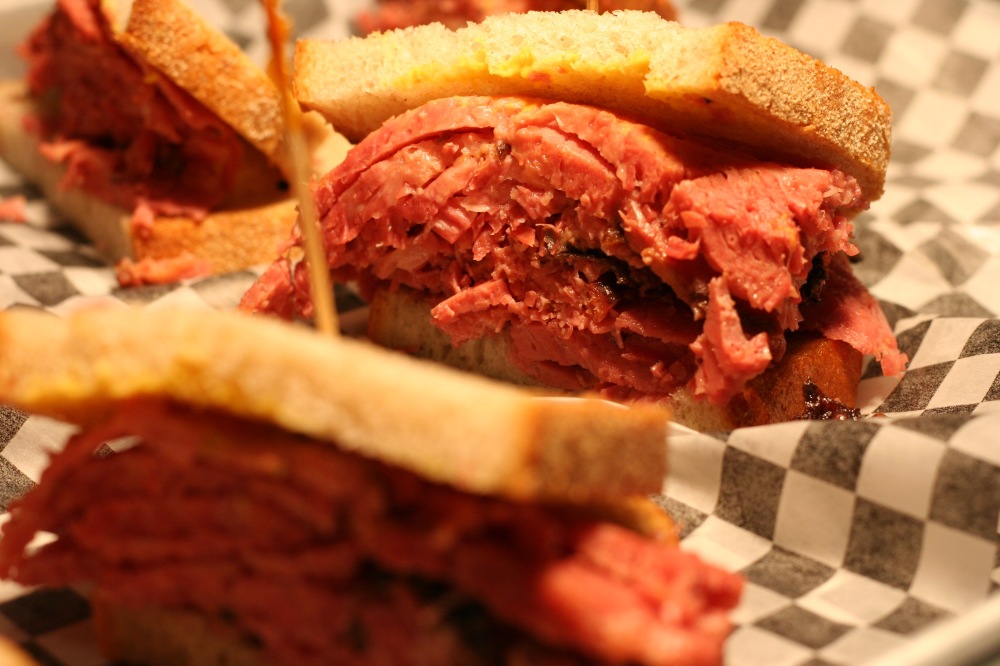 The cured and smoked beef in the sandwich I tried was so meltingly tender and juicy, it’s hard to avoid having some of it fall out of the sandwich as you eat it. Definitely eat these over a plate or wrapped in paper, you won’t want to let any of that delicious beef go to waste. The spice was delicate and not at all overpowering, letting the “beefiness” shine through. 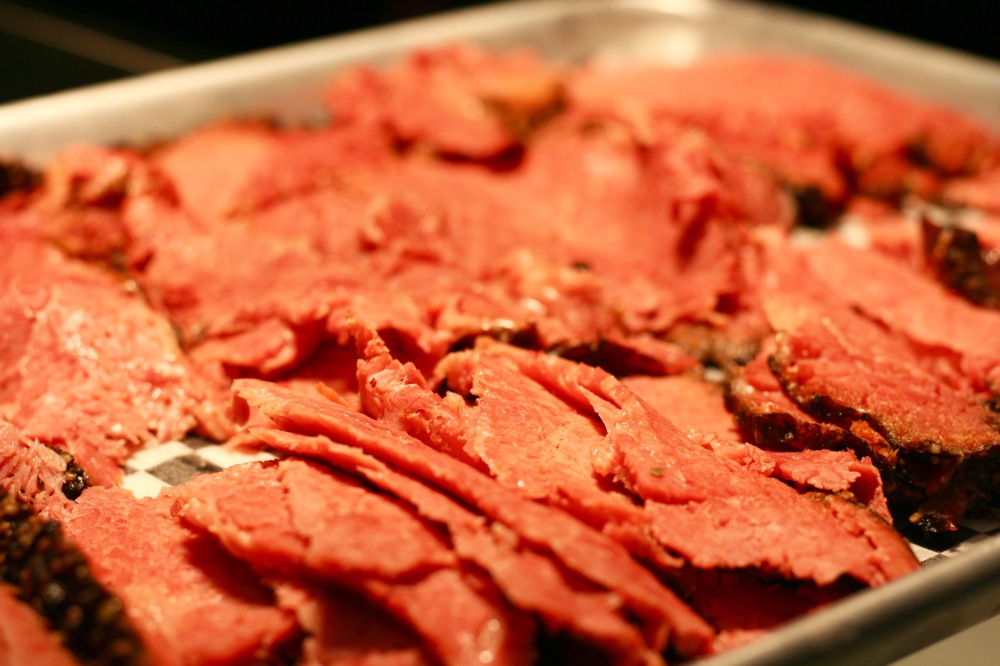 Dunn’s Vancouver Executive Chef, Alex Brown, explained to me how the beef gets its delicious flavour and tender quality, which to me sounds like a Brisket Spa. The trimmed brisket lounges leisurely in a brine bath for several days, which helps to tenderize it. Then it gets dried off and massaged with a fragrant blend of spices before being oven-smoked for 18 hours. After that it spends about 4 hours in a steam sauna until it’s supple and fall-off-the-bone tender (but without the bone). This is why their meat must be sliced by hand. It’s so incredibly tender that it would fall apart if sliced using an electric slicer that inferior delis use.

To this American-born foodie, this sounds exactly like pastrami, right? It’s the same method of brining, rubbing, smoking and steaming beef brisket. But when I called it pastrami I was told by Alex, no, it’s smoked meat! If you want an in-depth explanation of the difference, I recommend this excellent article by Ben Jay on Serious Eats. This is Canada, and Dunn’s is a Montreal tradition, so, smoked meat it is!

Dunn’s is so confident of the quality of their meat that they even served up samples from two different competitors at the VIP event I attended (yes, somehow I was allowed into an event for VIP’s). I tried both, and I have to say, Dunn’s meat won hands-down. The other meat samples were drier, not nearly as tender, quite salty and overpowered with way too much spice. 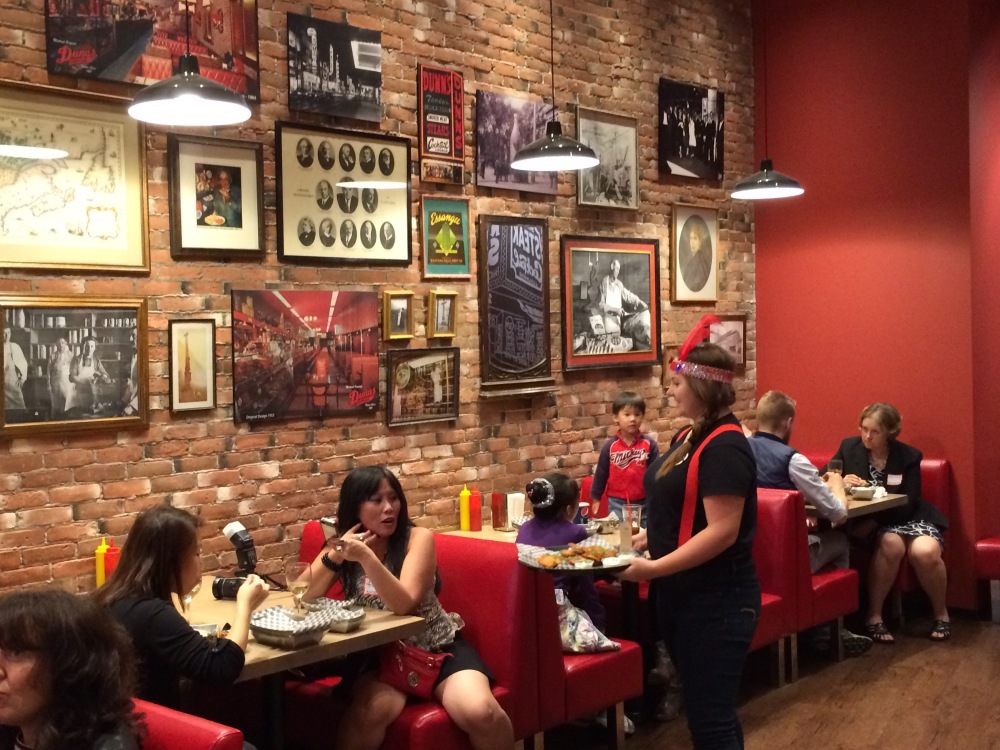 I never saw the old Dunn’s Famous in Vancouver, but the new one has a Brooklyn vibe with exposed brick walls that are covered with vintage photos and shelves full of old glass bottles and antique kitchen gadgets. Tables and booths covered in red naugahyde let you stick around to eat and soak up the atmosphere if you prefer not to order and run. It’s an open and airy space designed to evoke the eatery’s 1927 roots. And the staff is very friendly, too! 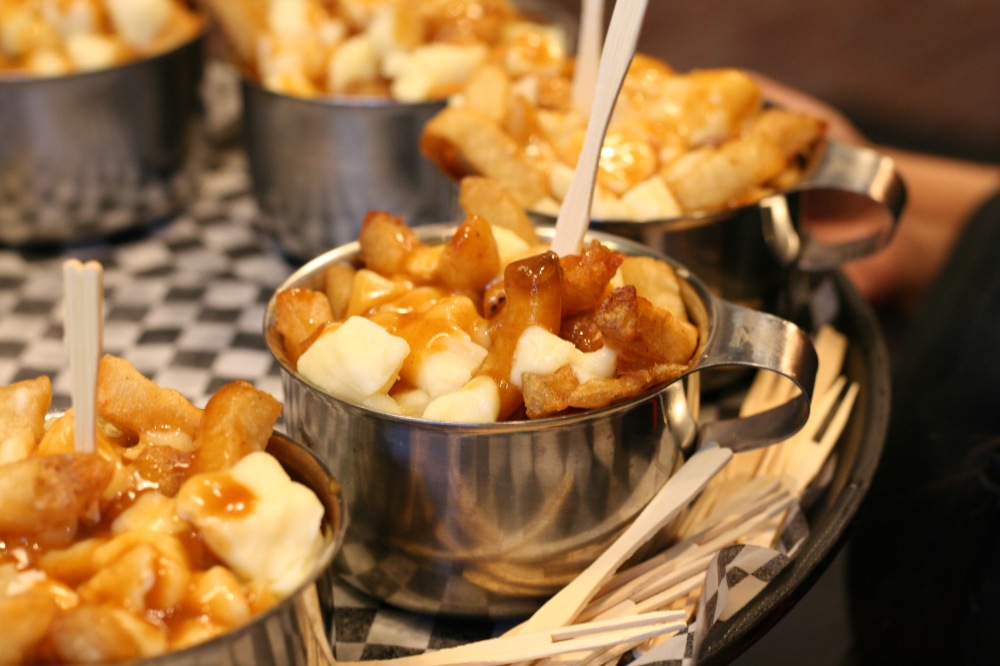 Dunn’s doesn’t just have smoked meat sandwiches, they also have that other Montreal staple, poutine (with barbecue gravy), in addition to other Jewish deli offerings such as potato latkes, matzoh ball soup, deep-fried pickles, eggrolls (stuffed with cabbage and smoked meat, of course!), and classic strawberry cheesecake that is made in-house. They also have Reuben sandwiches, one of my favorites! They didn’t have any of those to try at the VIP event, but I’ll definitely be stopping in to have one if they’re as good as the smoked meat sandwiches I tried. 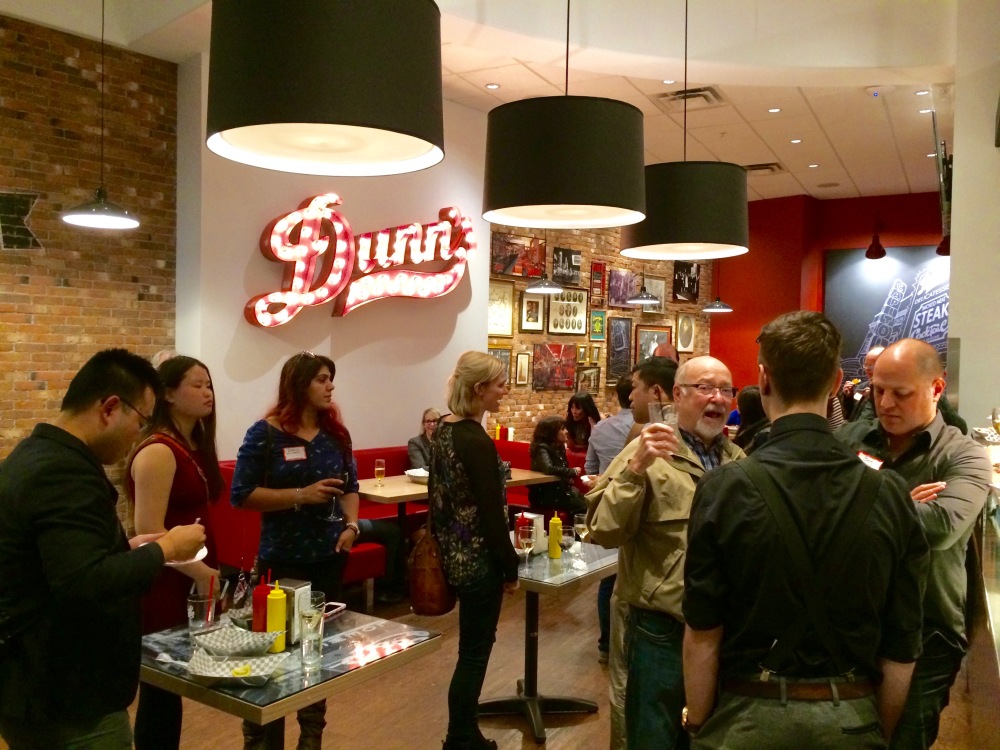 Dunn’s is in a great location on Seymour street between Robson and Smithe, just down the block from the Orpheum Theatre in the heart of the entertainment and cultural district of downtown Vancouver. If you head over there this Friday for their grand re-opening, you can buy their smoked meat sandwich for the vintage price of $4 each. You can also buy their pickles, sauerkraut, salads and a variety of meats so you can construct your own Dunn’s Famous sandwiches at home.