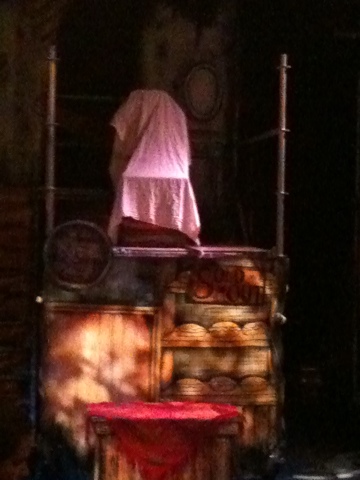 Every time I go to see a Fighting Chance Production I am impressed. To have such a calibre of players here in Vancouver is such a treat. People who complain that Vancouver doesn’t have Broadway quality theater are simply not looking hard enough. The arts are alive and well in our fair city, and tonight they took the form of an evil barber named Sweeney Todd.
This storyline is not for the faint of heart – a tale of murder, madness and revenge, there’s hardly a character that isn’t damaged or tainted starting with Alex McMorran’s brilliant portrayal of the main character Todd, a man consumed with revenge and driven to madness by the loss of his wife and daughter. He befriends a local baker, Mrs. Lovett, who is unlucky in business and in love ( played by Cathy Wilmot) and together they bond over hate, greed and cannibalism.
Under Ryan Mooney’s direction, these characters don’t just come alive, they shine – credit is given to Ryan for bringing out the best of his players.

I was most impressed with the performances given by young Krista Gibbard and Jeremy Fornier-Hanlon. Kirsta’s Johanna Barker comes alive,  and her voice – wowsers, her voice – I couldn’t believe that such a thunder of a voice could come from such a tiny package. Her voice breaks at times, but only makes her character more believable, as it should, Johanna being the only true innocent in this twisted tale.

And what can I say about Jeremy – his poor Tobias Ragg – humourous at times, by the end of the play your heart just breaks for him. Couldn’t image anyone else playing him. Together this wonder duo gives me hope for the new generation of players waiting in the wings.

Noteworthy are also the performances by Eric Alexander Steel as Adolfo Pirelli and Sabrina Prada as the beggar woman. They manage to bring life to support characters and at times, steal the show altogether.

If you haven’t figured it out by now, I really liked the play. I encourage everyone to see it. Sweeney Todd is playing now until Oct 30th at The Jericho Arts Centre. Don’t wait too long –  tickets are bound to sell out fast. Get your tickets here