Since my cousin was moving back to Asia, my fiance, sister and I decided to take him out for dinner. What he wanted to enjoy was food that he rarely can have back home – in this instance it was sashimi! He introduced to us a favorite restaurant of his, Toyotomi, located in Richmond near Richmond Centre.

We called ahead to book a dinner reservation for Sunday night around 6:30pm, only to be told our table won’t be available until 8:30pm. However, instead of waiting, we decided to show up at the restaurant, with the hopes that perhaps a table freed up or a reservation no-showed for an earlier spot. We arrived before 7pm, to be seated within 10 minutes waiting. For those who don’t want to wait for a table, call ahead a day or two in advance and book a spot – especially if you are a larger group past 4 people. Most of their booths sit 4 people perfectly.

My cousin told me Toyotomi offered a $14.99 regular Japanese hot pot, or a $20.99 deluxe Japanese hot pot + sashimi. It was decided unanimously between the 4 of us that the $20.99 menu was the better deal. It included a larger selection of hot pot items such as snowy fatty beef slices (probably one of the best types of hot pot beef slices offered at the restaurant), oysters, tiger prawns, pork neck (super tender pieces of pork, thinly sliced), and unlimited salmon, tuni, ika, tai, saba, spicy salmon and spicy tuna sashimi. Yes, that’s right, unlimited! My sister’s favorite was the tai sashimi (unlimited!), whereas mine was the very limited baby tako (baby octopus marinated in soy sauce and sesame oil, limited to 1 piece per person). 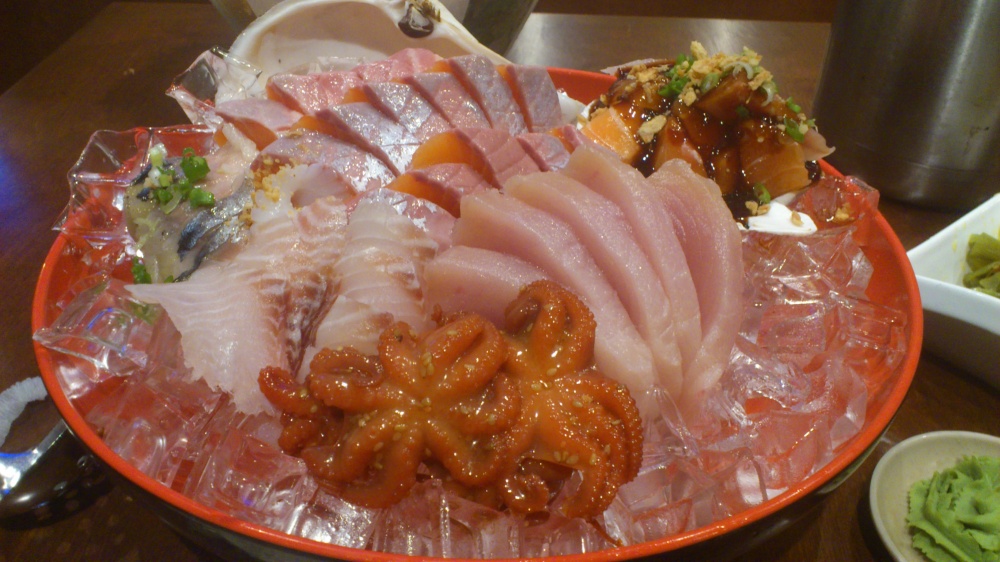 Here’s the catch though – the price does not include the soup base, which ranges from $7 – 9 depending on the base. We decided to go for the $8.98 Ying-Yang soup base, allowing us to choose two different soup bases on the menu, one on each half of the hot pot. We chose the Japanese Milky soup base (milky beef broth) and the Japanese beef bone broth. 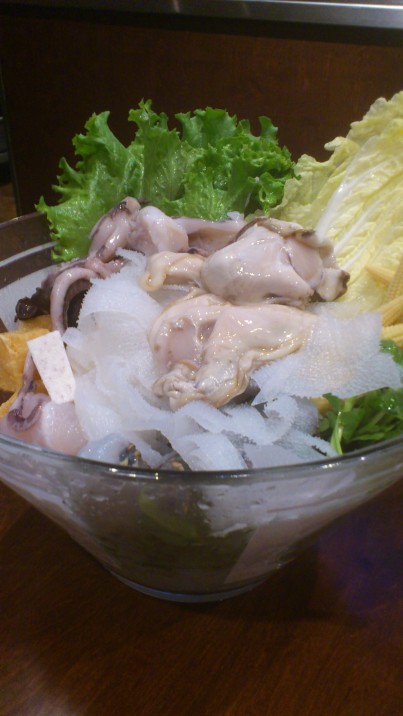 A couple more key costs to factor in – they do not include any sauces or drinks with the cost. However, because we weren’t focusing our attention on the hot pot and more on the sashimi, we only ordered one dish of satay sauce to share amongst the 4 of us at $0.55. Plus they provided complimentary tea or water so we drank that instead of any additional soft drinks that could fill us up. For those wondering, they are licensed to serve alcohol if you wanted to drink with your meal.

Some items I found outstanding aside from the sashimi and the hot pot were the appetizers you could order. I particularly liked the deep fried mochi, baked sweet potato, and the frozen pineapple chunks they served. Those sweet items gave us an after dinner treat. They also offer a Mixed Sashimi Crispy (chopped and spicy sashimi placed on top of a fried wonton chip), limited to 1 per customer from the deluxe hot pot menu, that was quite tasty and similar to a sashimi taco you would order as an appetizer at a Hapa restaurant. Would’ve loved to order more of it if not for the limit.

Our final bill came out to be around $26 per person after taxes, not including tips. Because we basically ate enough for 2 days worth of food, this was a really great deal for unlimited sashimi and the quality was decent for the price. Don’t expect super fast service, but if you are smart and order lots of your items up front, and reorder earlier on while you are eating your first round, your second and third rounds will continue to trickle in.

Note, they will penalize you if you don’t finish your items that you ordered. They event post a small little chart outlining how much past tables of customers have been penalized ($1 an item) for not finishing the items ordered (although I’m not sure if they actually did that or not).

We loved our first visit to Toyotomi even though it will be my cousin’s last for awhile, however we had lots of fun trying this restaurant out, and will be back for more in the future.