Last weekend my friends and I wanted a central meeting place for dim sum – somewhere between Coquitlam and Burnaby. After some Urbanspoon research, we decided to give Spring Garden Chinese Seafood Restaurant a try.  Located in New Westminster on 12th Street @ 8th Ave, this small dim sum restaurant is a hidden gem, located on an almost dead street where stores on a Sunday morning aren’t opened yet as of 11am when we arrived. I called ahead for a reservation the night before for our table (they do take reservations, unlike most Chinese places), however wasn’t necessary at 11am. This restaurant is fairly small and probably sits about 50-60 people max.

We were one of three tables at 11am when we arrived. This restaurant reminds me of a very old and traditional dim sum house in Chinatown, unlike the ones you find in Richmond. Plastic table cloths line the tables, and the cups, bowls and plates remind me of when I was a kid and my grandma washed them out with tea just to make sure they were clean enough to eat out of! However, gone are the dim sum carts – considering how small this restaurant is, the carts probably won’t fit through the aisles. Instead you are presented a paper menu with check boxes to select the dishes you would like.

The menu had a lot of your typical dim sum ideas such as the shrimp dumplings (har gow 蝦餃) and pork dumplings (shu mai 燒賣), rice rolls with shrimp, and mini sticky rice rolls, but I was disappointed they didn’t have my ginger/green onion stewed tripe or rice roll with fried chinese donut. They also did not have egg tarts – which is usually a staple at most dim sum restaurants. What was even more disappointing on this visit was that their deep fried milk that I wanted to try was “sold out”.

As there were 5 of us at dim sum, we ordered quite a few staple dishes such as the crystal shrimp dumplings, shu mai, black bean stewed chicken feet, steamed BBQ pork buns, rice rolls with shrimp, deep fried shrimp spring rolls, deep fried glutinous rice dumplings (filled with pork and diced vegetables), beef meatballs, and red bean pancake. We also ordered a couple of “special” items on the menu including their deep fried salt & peppery tofu and their Singapore fried vermicelli noodles.

Hands down our favorite dish of the day had to be the deep fried salt & peppery tofu – nice and crispy, yet not super oily, it had the right amount of salt & pepper and chilis. However it would have been nice if it came with a vinegar dipping sauce of some sort like some other restaurants provide. For the price of $5.95 for the dish – this was quite a good deal as well. We also thoroughly enjoyed the Singapore fried vermicelli noodles, which consisted of BBQ pork slices, bean sprouts, carrot slices, and onions along with a curry flavor to the dish. I also thoroughly enjoyed the crystal shrimp dumplings as the wrapper was nice and thin and the shrimp had a nice firm texture to it. My husband and I did not particularly like the black bean chicken feet dish as it was overcooked and mushy. We also found it a bit oily as well. 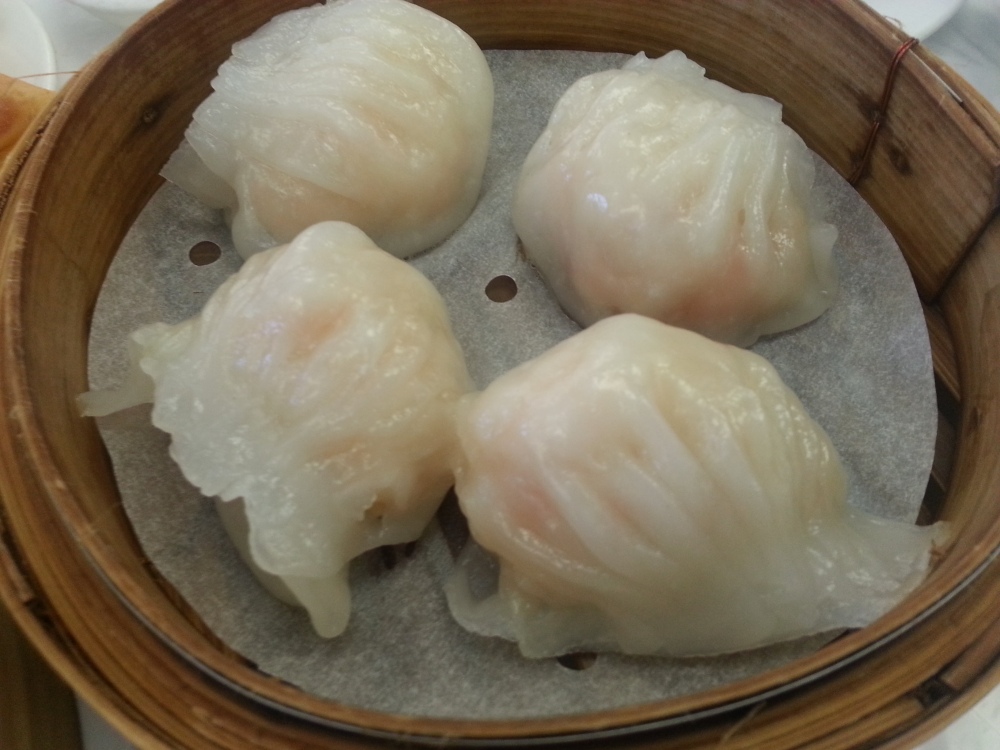 Overall, the service was quick (the servers replenished our tea quite often and quickly too) and the food was a decent quality for the price paid. Our bill came out to be around $50 for 5 of us. Most of the dim sum dishes ranged from $2.95 – $3.95. As we were leaving at around 12:30, the place was already full of dim sum diners, so if you are looking for a quick non-waiting time, go earlier in the morning on a Sunday like we did! 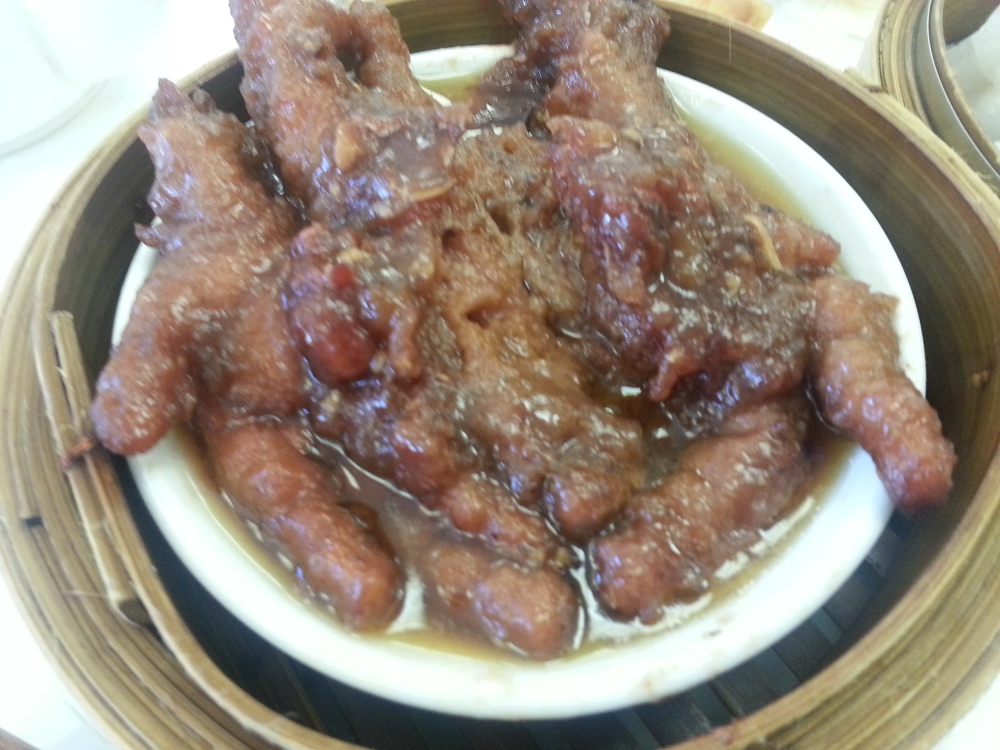 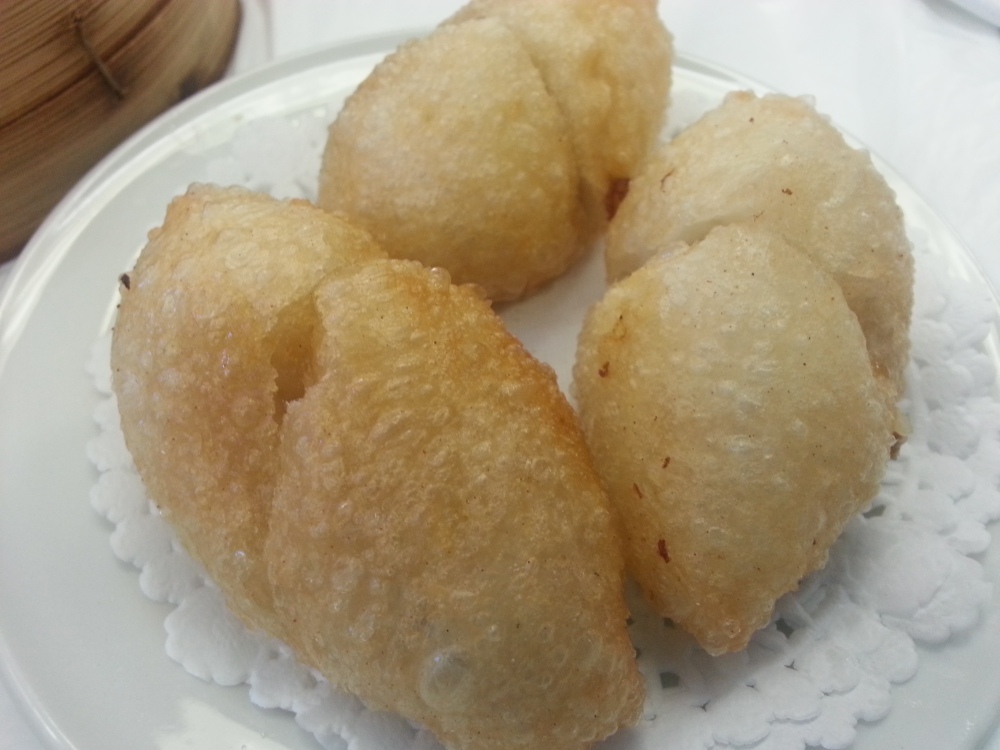