The 100 mile menu at Raincity grill consists of all BC ingredients that have been found within 100 miles of the restaurant. They were one of the very first restaurants to embrace the movement. It features sustainable and seasonal meats and seafoods.

Sean and I decided to check them out. Sean is a fan of Raincity Grill, and you can check his previous lunch review here.

We purchased a Groupon for their 100 mile menu. I’ve always been a fan of tasting menus, as you get to sample a larger variety of the restaurant’s cuisine and is more affordable than purchasing each dish a la carte. The downside? smaller (and in this case, much, much smaller) portions.

The Groupon was $80 for two people and we opted to have the wine paring as well for an extra $40 per person. 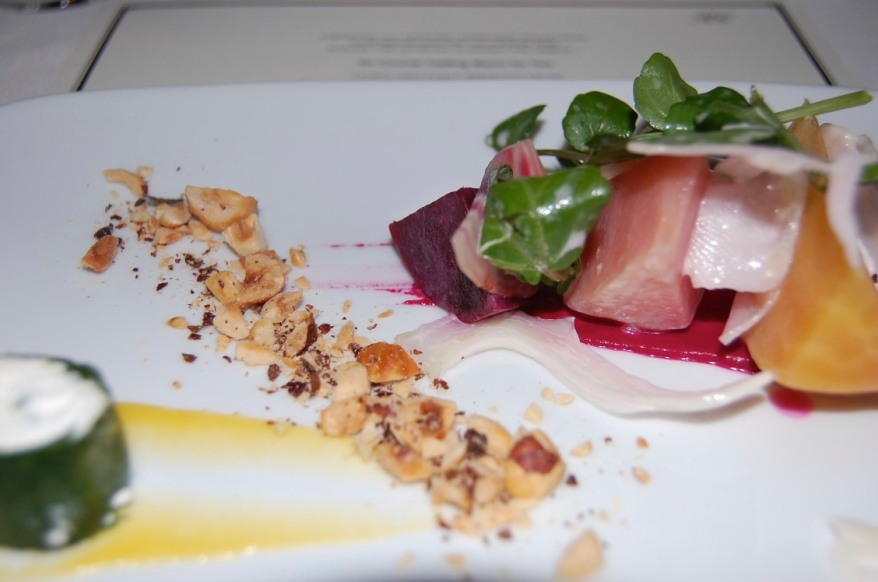 We started with the North Arm Farm Beetroot Salad It came with a small goat cheese cannelloni, and hazelnut mulch. The beets were perfect, and the nuts gave this dish a satisfying crunch. We had the Sumac Ridge brut with this dish. Delicious!

Secondly we had the Salt Spring Island Clams in a garlic, white wine and celery sauce. For an extra $6 we ordered the french fries, and I do recommend getting them. Sean chose the butter squash soup instead, it was deliciously creamy.

Following that course, we had the Fraser Valley Duck Proscuitto with endive salad in an averill creek blackberry gastrique.
The duck is cured in-house, and it taste just like proscuitto.
For our main dish we had the Fraser valley Roast Pork with smoked potato fondant, braised red cabbage and apple-chardonnay jus. This was my favourite dish of the night, and I would highly recommend it! The pork was juicy and tender and very flavourful.

The potatoes were cooked to perfection and the sweetness of the apple-chardonnay jus was a delightful combination. Great dish.
We also had the Farmhouse Cheese Platter with cheddar and alpine gold cheeses. Now the menu said this dish was for two. But really wasn’t – there were two small pieces of cheese, barely enough for one person.
For dessert, we had the Plum and Apple Semifreddo. This is a semi-frozen Italian dessert made with whipped cream and gelato. yum, so good.

Overall, I think everyone should experience the 100 mile menu at least once.
Would I try another tasting menu here? probably not. The portions were much too small, and even with the Groupon discount, our meal came to about $160. The wine pairing was touch and go, some of the wines were perfect with our food, some completely missed the mark.
The RainCity Grill is Zagat rated – you can check them out here.