Tasting Plates is a self-guided roving tour that allows you to explore select restaurants and establishments of a certain area. This allows you to try small, but tasty offerings from multiple places, so you can discover which ones you like and want to come back to visit! On Wednesday, the feature area for June’s Tasting Plates was Cambie Village. Thanks to Richard of Vancouver Foodster, I had the opportunity to check it out!

The first thing I did was pick up my Map Card and menu from registration at U & I Thai. Since it was super packed inside U & I Thai, and I could visit the restaurants in any order I chose, I figured I’d walk across the street to try Pronto’s tasting plates first!

Pronto is an authentic Italian place offering traditional dishes, such as handmade pastas, pizza, and slow-roasted porchetta. If you haven’t been before,the porchetta is always a fantastic choice.

To start off my night, I had this watermelon and strawberry margarita – so lovely! It was hot out too, so this was the perfect drink to cool off. Next time I’m at Pronto, I’ll be trying out their housemade sangria!

From left to right:

Gorgonzola crostini with walnut pesto: I quite enjoyed this. The gorgonzola wasn’t too strong or overpowering, and the aromatic walnut flavour was really nice.

Old-world Roman meatball with pomodoro & parmesan: Oh yes, now this is what I call a meatball. Fresh marinara sauce and a tender, juicy inside… plus the parmesan was just the cheese on the meatball. If you know what I mean.

Baked polenta with wild mushroom ragu: The polenta was a great carrier for the mushroom ragu, because it was a mushroom party in my mouth. I didn’t even know Pronto had this on their menu.. meaning another potential meal choice next time I’m here!

Our next stop was Las Tortas, a hole-in-the-wall-esque place with limited seating inside. Their paper bag ordering style allows you to choose whatever you want, with add-ons such as house made potato chips, Mexican salad, daily soup, drinks, or desserts.

Once we were inside, we were greeted very warmly and handed two cups of Horchata, a sweet cinnamon vanilla, milk, and rice drink. I appreciated the balance of cinnamon in vanilla in this one, but found this one is a little sweeter than some other Horchata’s that I’ve had before. I’m not complaining though :) 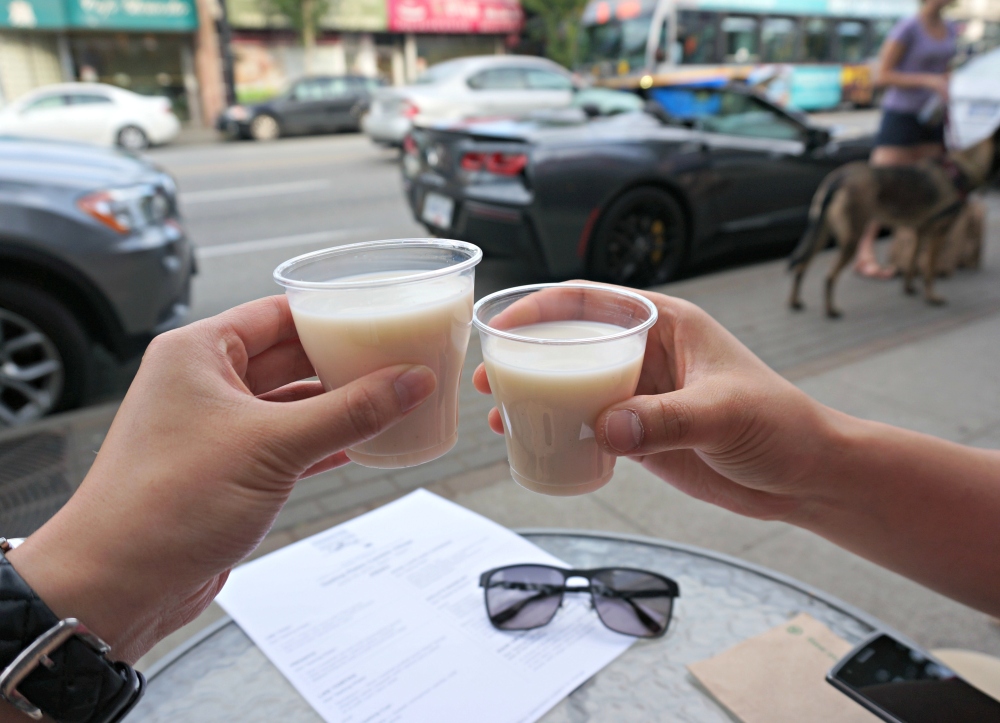 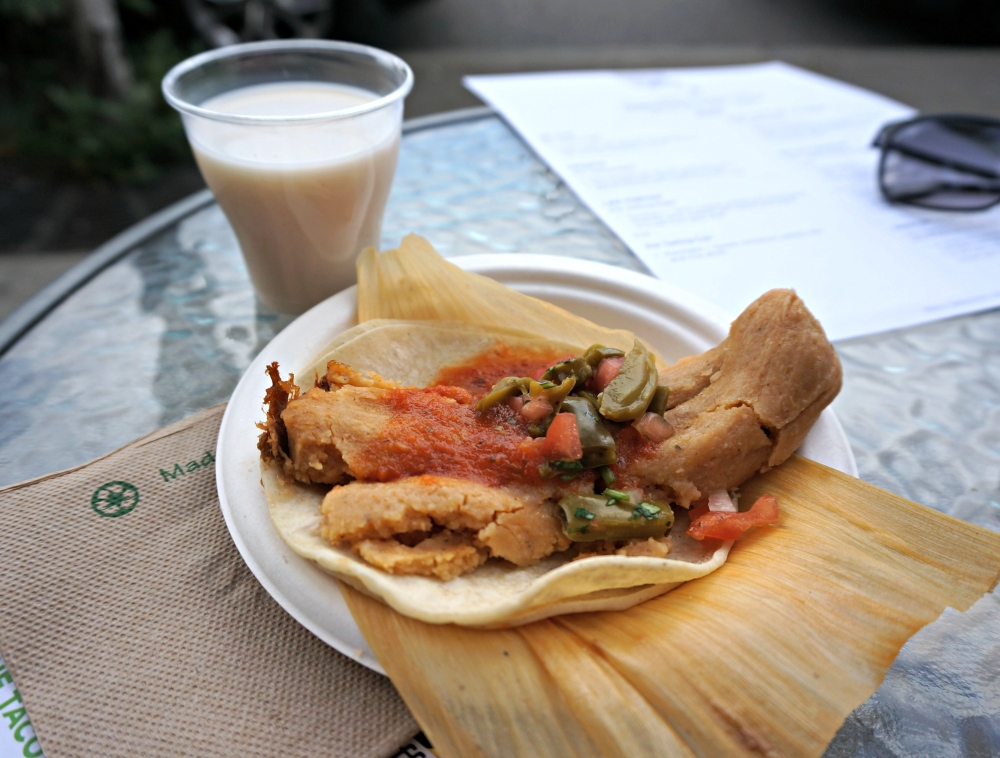 What happens when you cross a tamal with a taco? You get a Tamataco! With slow roasted pulled pork Tamal, chipotle slaw, topped with pico de gallo and served on a corn tortilla. It doesn’t look that attractive, I’ll admit, but it’s a tasty one!

At this point, it looked like the line at U & I Thai had died down a bit, so I figured I’d hop back over to try their tasting plates. Seriously, all the restaurants within walkable distance? So awesome. 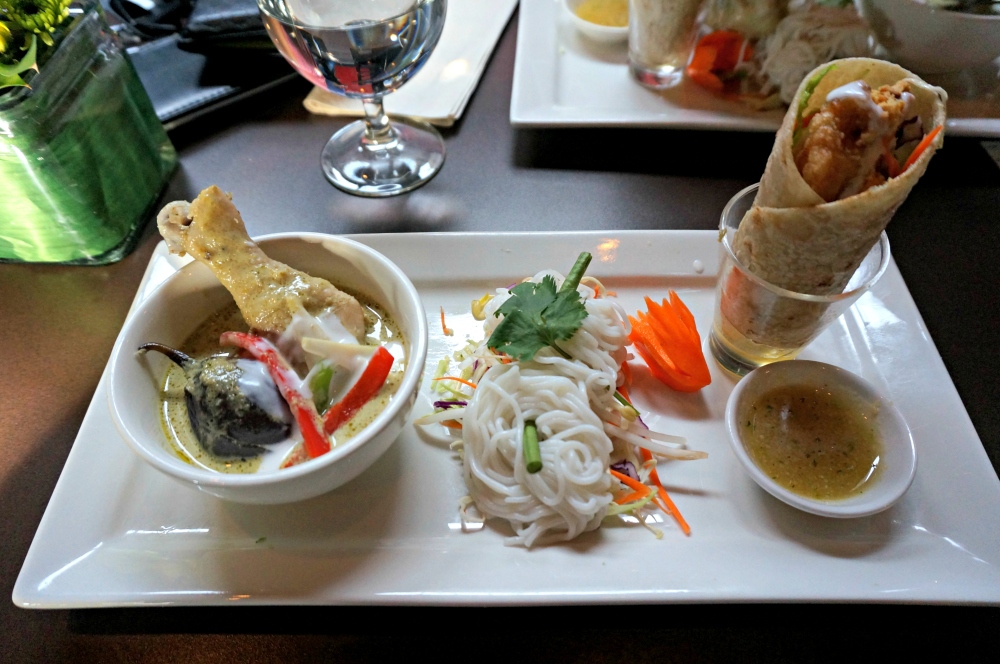 From left to right:

Green curry with chicken and rice noodles (ka nom jeen gang keaw wan): This was hot! As someone who can’t really handle heat, I still couldn’t resist dipping the rice noodles in for that punch of flavour. Thank goodness for the rice noodles to help cool it down.

U & I Thai Fish Taco with Thai sauce: The crisply battered White Basa fish was fat and juicy, especially with the peanuts, carrots and cabbage. The taco shell, however, seemed a bit tough – I would have preferred a softer taco shell to contrast the crispiness of the fish.

And it was time for a touch of dessert! We popped over to Rain or Shine, their new location on Cambie. I have been to their location on West 4th a few times before, but not this one yet, as they just opened in April of this year. Their homemade ice cream uses local, natural, and fresh ingredients – I love that because of this, their seasonal flavours are always changing!

Blueberry Balsamic (top): I really really enjoyed this one, with the berry compote, and the waffle cone pieces on top added the right amount of crunch. It felt like a summer celebration on your tastebuds.

Our next Tasting Plates was a little further down Cambie, closer to Cambie and Broadway behind the Home Depot, at EdgeCeptional Catering & The Edge Cafe.

There was a bit of a wait at this one despite the cafe being relatively quiet. When our tasting plates arrived, I found out why: they ran out of their seafood chowder! I’m a big fan of chowders so this was sad to hear.. but I guess it means I’ll have to find an excuse to come back.

Artisan #PestoChickenSandwich: I had a cute little bite for mine, which was perfect for my already-full stomach. This sandwich has juicy vine-ripened tomato, swiss cheese, rich basil pesto on French baguette. I would love to try a full one for lunch one day.

House Made #KillerChocolateChipCookie: I took this one home at the end of the night, and tried it afterwards. I’ve always had a sweet tooth, so the Edge was right… you really can’t eat just one. It was perfectly chewy with right amount of chocolate.

Last but not least, our final stop was at Solly’s Bagels!

Solly’s Bagelry is a Jewish bakery and deli with a variety of fresh baked Jewish goods, with 3 stores in Vancouver: Main & 24th, Broadway & Macdonald, and this one at Yukon & 7th. When you walk in, it has such a homey feeling, like you are sitting at your kitchen table at home with your family. 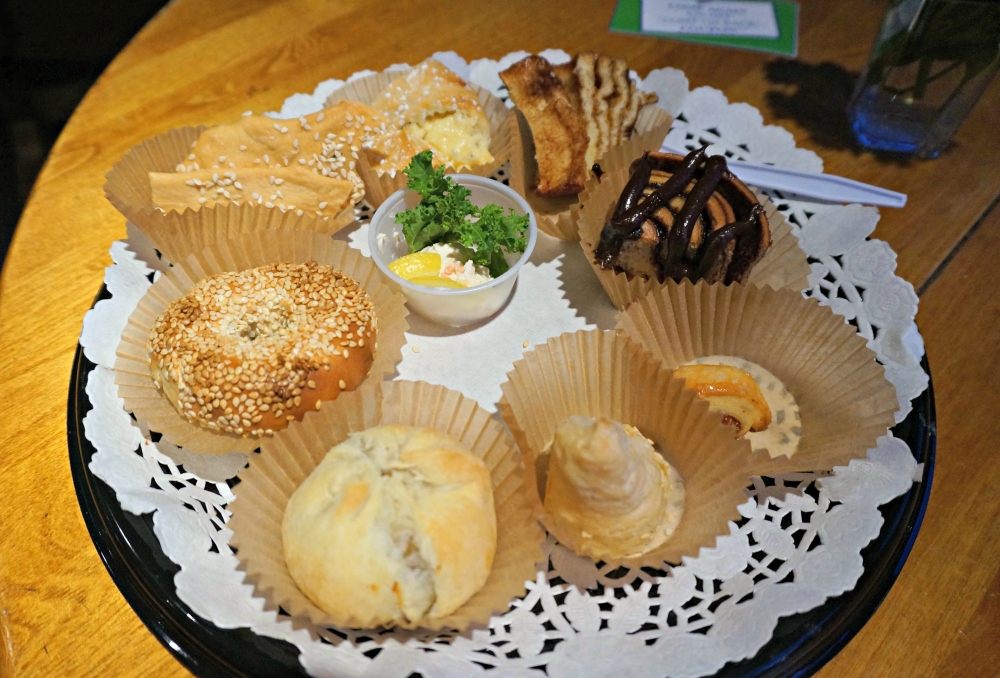 My my, just take a look at this platter! I didn’t know where to begin, there were so many!

One of my personal favourites was the Mini Potato Knish – this one was freshly baked and was still piping hot. The potato was warm and soft – a little bit like eating chocolate chip cookies that have just come out of the oven. The Mini Sesame Bagel had more than enough Sesame seeds, which I definitely appreciated. The Chocolate Babka was another favourite – soft, chewy, with just the right amount of chocolate flavour.

By this point at the end of the night, I was stuffed. I definitely appreciated having smaller or mini sized portions, because I was able to taste and sample so many different flavours. For anyone who’s looking to try out Tasting Plates, I would definitely recommend bringing along a Ziploc bag or Tupperware to take home any leftovers. Unless you have a bottomless stomach, you probably will have some to take home!

The next Tasting Plates will feature Olympic Village on July 8. Early bird tickets are available now until June 23 for just $29 on their Eventbrite – get ’em here!