September 28th marked the first ever Vancouver Taco Crawl by Vancouver Foodster which took us on a whirlwind taco feast through various parts of Vancouver. I was really excited to take my hubby to this event, as it was his birthday week!

Our first stop to pick up our passport/menu of tacos was at Dosa Hut in South Vancouver, located at Fraser St and 57th. There we were introduced to a South Indian Dosa taco – a choice of either chicken or vegetarian. We tried both. I really enjoyed the dosa, known as a crispy, fermented flatbread. Thin, light and crispy, it was a very unique take on a taco with its curry spiced filling.

Our next stop was downtown at Patron Tacos & Cantina, located on Robson Street just a couple blocks away from BC Place. We were one of the first groups to arrive, so luckily didn’t have to wait for a table considering there were two sports games on that evening around the area. We experienced very friendly and attentative service by the manager. Our tacos at this stop included Cochinita (pork butt) with achiote paste and red onion and Nopales (cactus tender leaves) with cheese and homemade salsa, both served with a scoop of refried beans and tortilla chip. This was our first time trying cactus and it was surprisingly quite tasty. I only wished they provided us with more tortilla chips to eat the refried beans with. I think we will be back next time in this area to try their enchiladas which looked really good.

Next we headed down towards English Bay, where we would find our next taco place – La Catrina, a small quick service, limited-seating area restaurant on Denman Street. Voted by Mexicans as Vancouver’s best tacos, I was eager to try to see if that lived up to the name as their slogan is “Tacos to die for”. At this location we were served Papas Mexicanas, mexican potatoes with cream sauce, and Res En Cascabel, braised beef cooked in a cascabel chili sauce. My hubby really enjoyed the potatoes with cream sauce taco, whereas I took a bite of both but felt it was a little salty for my liking. By now we were quite full.

We next managed to drive back south, outside of downtown Vancouver, to Cambie & 17th where we found Las Tortas and Los Tacos. Both family run businesses, we were met with really friendly service, and locally sourced, simple, yet really mouth-watering bites of fresh tacos. Got served with a Pulled Pork taco and a Mexican Zucchini taco, both simple, light, and flavourful. In particular I enjoyed the self serve salsa bar, very nice. 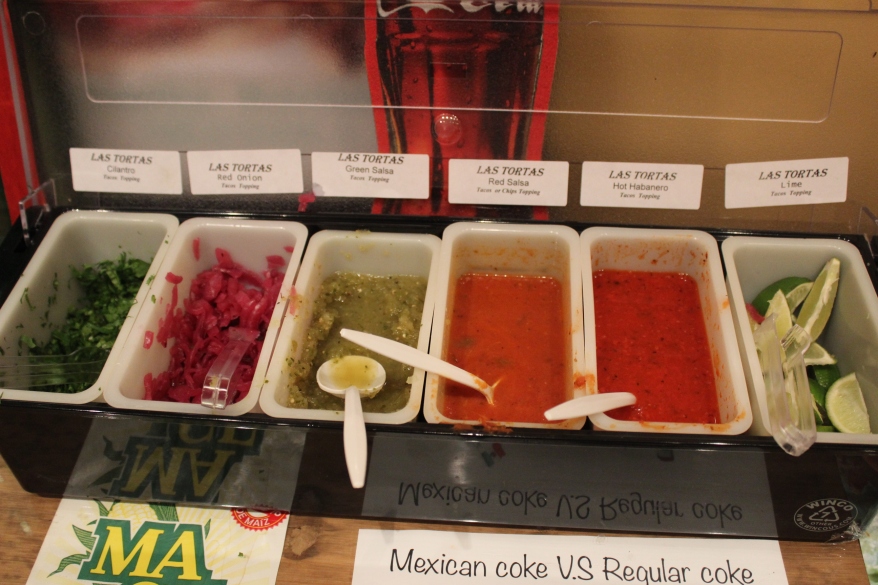 For our last stop, Tmix Tea served us a bubble waffle with a scoop of in-house made ice cream. We had a selection of ice creams to choose from so I decided to go with the Earl Grey, while my hubby ordered green tea, which he thought would help him with digestion (which it didn’t). The bubble waffle was nice and chewy when you bite down on them, but crispy on the outside. This was the only dish of the night I finished every bite of it. This dish also inspired me to make my own bubble waffles at home and add a scoop of Earnest ice cream!

Overall this Vancouver Taco Crawl was a huge success! I watched some people bring their Tupperware, and I encourage anyone partaking on another taco crawl to bring a container because it can be quite a lot of food once you add up all the stops. My lucky husband ended eating more than 9 tacos, which included a few of mine. We look forward to the next taco crawl!