You know when you go to shows with great reviews and set high expectations and sometimes you’re disappointed? Cavalia’s Odysseo is definitely not one of those shows. Even with my high expectations, Odysseo still blew me out of the water. 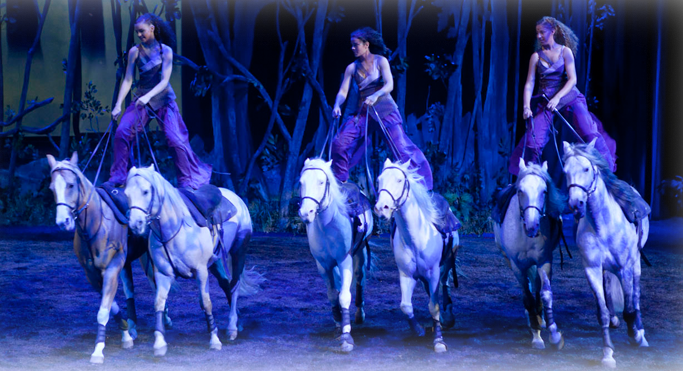 Odysseo uses 67 horses and 48 artists for riders, acrobats, aerialists, dancers and musicians for the show. All 67 horses can perform any of the acts in the show which range from jumping, dressage to barrel running and more. The artists also work with different horses every night and this keeps both the horses and riders happy as every night is a little different. The human performers of the show were just as amazing as the horses. Without giving anything away, you will never see a merry go ’round the same way again!

The show itself is set on a spectacular stage. Cavalia created a 1,626 square meters stage, in the middle of which rise two hills each three storeys tall. Some 10,000 tons of rock and sand were used to create the stage. Because the horses are running night after night, the sand used for the stage is sourced and imported. It is ultra fine, super soft and fibers are added to cushion the horse’s hooves. This makes all the acrobats of the show even more impressive. I could barely jump in loosely packed sand when I was in Mexico and the sand Odysseo used is even softer, finer. I had a really hard time just walking around backstage in flats, never mind doing flip after flip!

And yes, the rumours you hear of a watery finish are true (haha get my reference to blow me out of the water in the intro? I am a dork). The Odysseo epic wraps up as the stage is flooded with 300,000 liters of water.The engineering behind the stage is so impressive that the entire stage floods in about 3 minutes and can be drained and ready for another show in 45 minutes.

In terms of my experience, full disclosure, Lesley and I were invited to their social media VIP night and enjoyed a complimentary rendez-vous VIP premium package.

-Access to the private RENDEZ-VOUS VIP Lounge 90 minutes before the show, during the intermission and after the show

-Exclusive stables tour after the show

If the package is within your budget it is worth every penny.Sure the food was good but the really special part was visiting the stables afterwards! Visiting the horses was pretty awesome, especially if you are a horse lover. You can’t pet them but you get to watch the artists brush and interact with the horses after the show and you can take photos with the horses. You also get to see how each horse is different. Some ignore you, some are shy, some are temperamental, and some are even flirtatious.One handsome looking stallion flirted with me by blowing air my way and rubbing himself up against the railing and giving me the “Please pet me look”. I may or may not have caved.

What they also don’t list in the VIP premium package: you get access to heated bathrooms with running water and real toilets. If you’ve been to any Cirque Du Soleil or Bard on the Beach show in Vancouver, you know the porter potties get kind of gross. Even if they use the ‘nice’ ones. So this is a huge bonus!

If you the VIP package is out of your budget, under the White Big Top there really isn’t a bad seat, so don’t worry too much if you’re near the back or side. Also, while the White Big Top is heated, it is still chilly (I kept my jacket on the entire show) so make sure to dress warm!

Last but not least (as this is a food blog after all), for those who are looking for a drink or quick bite before the show,The Sin Bin is right around the corner. I’ve visited The Sin Bin quite a few times for Canucks games and they have serve up some great appies and drinks.

All in all, 5 horseshoes out of 5 for Odysseo! The only thing that would have made it better was if Celine Dion somehow made an appearance singing “My Heart Will Go On” as the staged flooded (yes it is that good)!

As a reader of Vancouver Bits and Bites, use the code LIBERTY and you will receive 10% off your ticket purchase online, at the box office or over the phone. Odysseo will run until January 12 in the Olympic Village, so don’t miss out. You can purchase tickets and find out more about the show here.